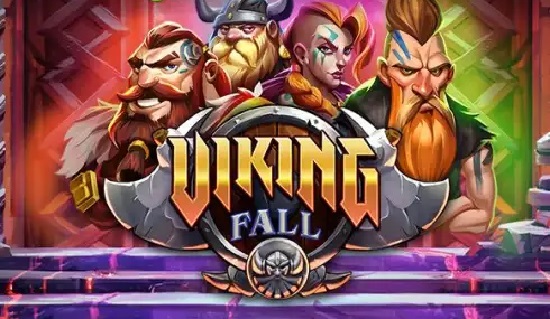 Initially, you’ll be playing with 6×4 reels, giving you 4,096 possibilities to win (expanding reels allow for up to 262,144 ways though). The slot’s winnings are capped at $250,000, which indicates that a return of up to 25,000x is attainable. Colossal symbols, wilds, multipliers, cascading reels, and free spins are among the special features available.

It doesn’t have the widest betting range, but considering the extreme volatility, $0.20 to $10 wagers should enough.

At the end of its finest spins, Viking Fall will pay out a maximum of $250,000. We can calculate that a 25,000x top jackpot is possible with stakes of up to $10. Even in a high-volatility game like this one, that’s a fantastic top reward.

In a slot machine, a Return to Player of 96 percent is expected, and that’s fine.

The Cascading Reels mechanic is present, and it provides you with something more in addition to bringing fresh symbols to the reels. It starts by removing winning symbols, so it only activates during rounds where you build combinations, and then it lets others in. At the same time, it expands the gaming area by one row, increasing the number of possibilities to win. It will go as high as 8 symbols, giving you a total of 262,144 opportunities to win. The game area is reset at the end of the feature, once all cascades have been completed.

The wild symbol, which lands and functions as a substitution while also increasing the multiplier by 1x, can also help you out. When the spin is finished, it returns to the basic multiplier.

A huge symbol can appear on the reels at any time, and it counts as many symbols of the same type (randomly chosen as well).

There is one additional bonus available: free spins. Get the requisite 3+ scatters to win 6 to 12 free games. These can be re-activated.

In their case, a few advantages are utilized. The first is that once the gaming area has expanded, it will not shrink back to its previous size. The second is that the multiplier gained from wilds does not reset between spins.

Blueprint Gaming went with a rather typical theme for this slot machine, but most players enjoy it, so it’s not a big deal. They obviously went with the Viking motif, which results in a vast gaming area filled with either a mix of runes or representations of four Viking warriors and their weapons (swords, hammers, helmets, axes).

Viking Fall is a decent choice, a slot machine with a lot of potential, attractive graphics, and useful features. It’s unlike your average game in most ways, thus it’s a fantastic alternative for those who are tired with the current possibilities.