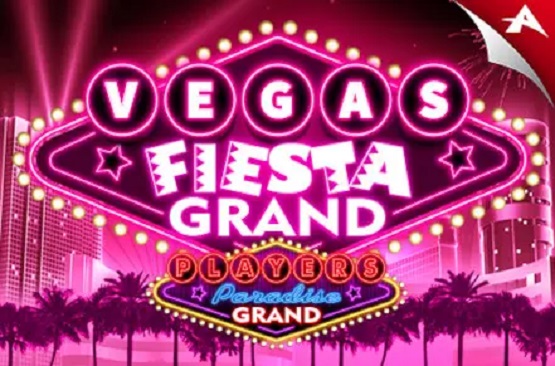 The Vegas Fiesta Grand combines two types of themes that are both popular on their own but are rarely seen together. On the one hand, there’s Las Vegas and its gambling, and on the other, there’s Mexican-style parties. The title contains a little bit of everything, including a hint of the Grand Jackpot, which you’ll be chasing inside. Ainsworth has this slot available.

This slot machine features 5×3 reels and 50 active paylines. The payouts aren’t spectacular; they only go up to 1,000x the stake (Grand Jackpot), but there’s a 96.28 percent RTP, which is sufficient. The wild symbol, a scatter, and a feature called Players Paradise could all help to improve gameplay.

You must have one coin in the bet for each of the 50 fixed lines, therefore 50 coins are always used. As a result, the minimum bet will be $0.50, which is higher than you might imagine. Each round, you can wager up to $25.

The Grand Jackpot, which can be won during the Players Paradise bonus, appears to be the finest way to win in Vegas Fiesta Grand. Regular combinations aren’t even close, as they can pay up to 2x the stake each line, for a total of 100x per spin.

While this does not appear to be a high-paying slot machine, it does have a 96.28 percent RTP, which is outstanding.

One of the feature symbols that you can receive inside is the Players Paradise Wild. It will replace for other symbols as necessary, which will save you money in the long run. It will also pay out immediately if up to 5 of these wilds make a winning combination. Even though it’s the best payout promised by a symbol, only 2x the stake is paid, which isn’t much.

The scatter symbol will be a casino chip with the words Players Paradise Grand printed on it. Players Paradise is triggered when three or more of these appear on the reels at the same moment.

For starters, there are scatters that trigger this function, but there are also additional symbols that could appear, each with a prize or a mechanic. The mystery prize symbol is one, and the Double logo is on the other. When they land, they both give you one extra free spin.

The empty display casino chip symbol will award you a surprise prize of up to 500x your investment, or one of the three smaller fixed jackpots. The Double logo will double the value of all reward symbols currently shown.

When all 15 positions are filled with the three types of symbols used in this feature, you can win the Grand Jackpot.

The blend of themes includes gambling in Las Vegas and Mexican-style partying. However, only two symbols use the Mexican side. Five basic-looking Royals are at the bottom of the symbols, which also include noisemakers, trumpets, champagne bottles, dice, roulette, and the two feature symbols.

Vegas Fiesta Grand doesn’t appear to be anything special; it’s just a typical Las Vegas-themed slot with a couple of extra symbols from a different theme. The main feature, on the other hand, can make it an interesting choice. Even with the great RTP it states, I’d say it’s a game for the more casual player because it doesn’t pay very much.