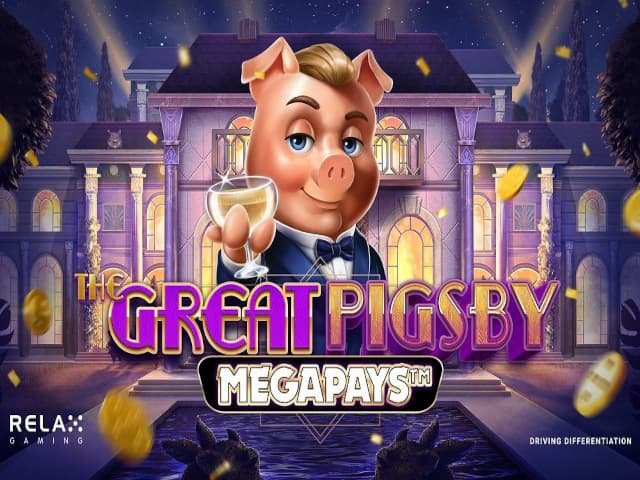 Relax Gaming created a slot machine inspired on The Great Gatsby three years ago, but it included pigs as the primary characters. The Great Pigsby Megapays is the sequel to previous game, and it features a far more powerful game engine, since they now rely on Megaways rather than traditional ways to win. Otherwise, you can anticipate the same high-quality graphics and a design style that harkens back to the Art Deco movement of the early twentieth century.

The Great Pigsby Megapays will employ the 6-reel, 117,649-way-to-win method that has become more popular in recent years. The game pays out a lot of money, up to 20,000x the bet merely for normal prizes, and it also has progressive jackpots (Mega Jackpot being the top one). Despite its extreme volatility, this game maintains a respectable RTP of 96.19 percent. Respins, free spins, wild respins, and multipliers are among the game’s good features.

The Great Pigsby Megapays slot machine is as spectacular as the majority of slot machines in its genre. Highly unpredictable, it takes advantage of the heightened risk to reward players handsomely, with payouts potentially reaching 20,000x the bet.

There are four Megapays progressive jackpots in this game, ranging from the highest value Mega Jackpot to Major, Midi, and Mini variations.

The slot’s overall return to player (RTP) is 96.19 percent, which includes the progressive jackpot contribution.

The Great Pigsby Megapays is a Megaways slot at its core, with the basic structure seen in many of similar games. There are six reels in total, each with two to seven symbols. There are a random amount of symbols on each reel, allowing for a lot of variability, and there are up to 117,649 ways to win.

On the reels, players will encounter a wild symbol, an expanding symbol that takes over the full reel. It will have a multiplier attached to it that corresponds to the number of symbol positions occupied. This one may only appear on reels 2-6.

The increasing wilds are collected at the top, in a special Piggy Bank, after landing in view. It’ll give you a chance to activate a major feature (Wild Respins, Great Pigsby Respins, or Free Spins).

The Megapays bonus, which can be used to win a progressive jackpot, is the final feature. However, triggering this feature is a chance occurrence. A Megapays symbol is chosen from the slot’s Royals on the inside. You’ll receive an initial spin and potentially more re-spins to collect the Megapays symbols. One of the jackpots can be won depending on how many symbols are collected (up to Mega Jackpot for 15+ symbols).

The inspiration for The Great Gatsby has resulted in the most peculiar of games: a slot machine with pigs as the main characters. Even if the pigs may appear to be an insult, the design style is appropriate for the chosen subject. A mansion serves as the backdrop, and the reels are positioned on the building’s front side.

When we look at the symbols utilized, the first five are elegant Royals, ranging from 10 to A. A cigar and whiskey glass, a phonograph, a headband, the Pig Lady, and the Pig Man follow. The only feature symbol present is the Wild.

The Great Pigsby Megapays can be a good slot machine given everything it has to offer, but it isn’t for everyone. The progressive jackpots make for a large amount of its RTP (9.44 percent), so it’s only worthwhile if you factor that in. The RTP on the regular side is really low.