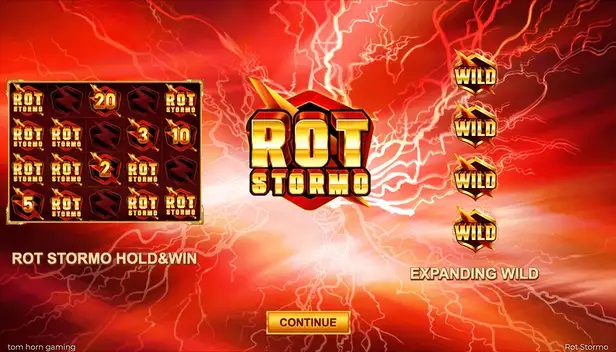 Tom Horn created Rot Stormo, his take on a traditional slot machine, but they weren’t content with only using fruit symbols. There are a few contemporary elements included, like scatter jackpots and hold & win, both of which are currently very popular.

You will have 5×4 reels, which is plenty to accommodate 40 active paylines. A 2,000x maximum prize is conceivable thanks to its scatter jackpot, although the RTP doesn’t exceed 95.25 percent. Expanding wilds and Hold & Win respins can be anticipated inside.

The average bet on a Tom Horn slot machine starts at about $0.20 and typically tops out at $100. I don’t anticipate Rot Stormo to be any different.

The Rot Stormo Jackpot is your final objective here. At maximum, it’s worth 2,000 times the stake, however to get that kind of payment, those symbols must appear in every position that is open.

This game is also regarded as having increased volatility and two possible RTPs. If you want to test it out, choose the 95.25 percent version, albeit that is also not ideal.

Features of the game Rot Stormo

The wild, which is one of Rot Stormo’s two main qualities, has the capacity to grow. When it lands on the middle three reels, where it is permitted, it will do that action. All other locations on the reel become additional wilds when it appears there, expanding the wilds. While these stand in for conventional symbols, they do not operate with Rot Stormo scatters. If a new victory doesn’t form with its assistance, it also doesn’t expand.

On the reels, you may also see the Rot Stormo logos, which are your standard scatter symbols. Only how many times they land on the reels matters, not where they are on the screen. You have access to the Hold & Win Respin if you get 6 or more in a row. After the triggering symbols are locked, you are given three respins to try and acquire more. If fresh Rot Stormo symbols appear, the respins are reset.

If you have 12 to 20 of these symbols at the feature’s conclusion, as indicated by the prize ladder on the left, you will be paid. The investment is multiplied by 10 to 2,000 to win. Cash symbols can also appear and bring further rewards.

There is a red storm-like theme present, which is primarily seen in the background image. The reels show a conventional fruit slot with all the necessary symbols, which is intriguing. These include bells, thunderbolt wilds, and the game’s emblem in addition to cherries, oranges, grapes, and melons.

A few contemporary features are combined with a traditional fruit motif in the Rot Stormo slot game. Give the slot machine a try and see how you like the experience, even though they made it harder to collect prizes from the jackpot ladder.