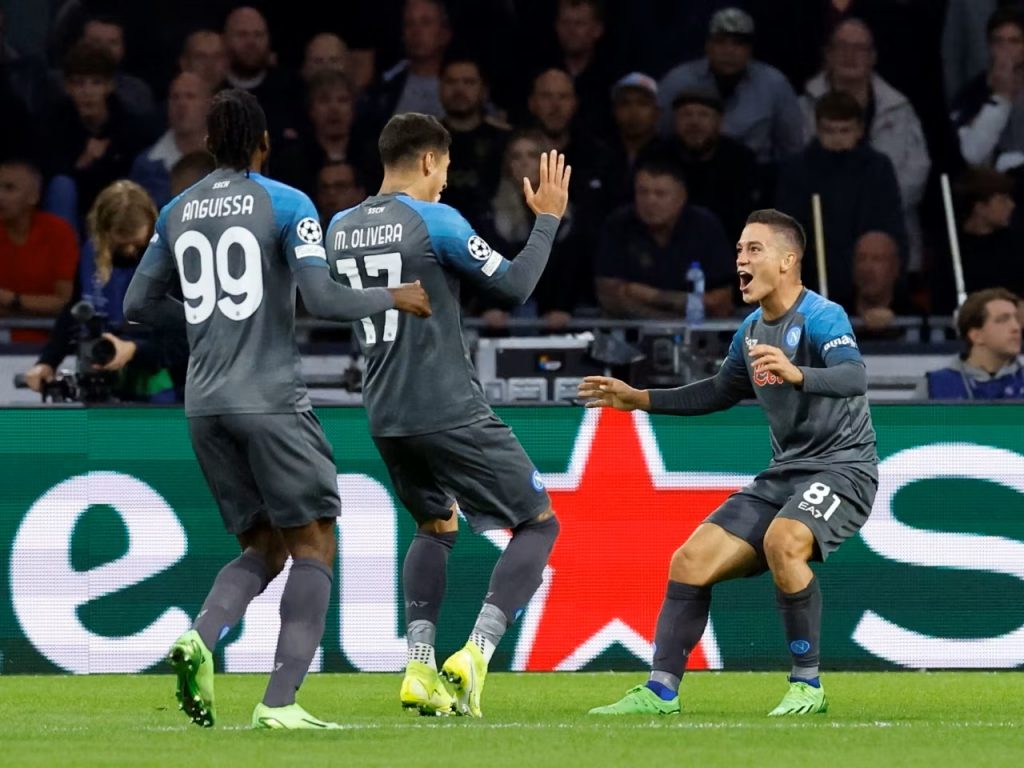 Eight days after their resounding victory in Amsterdam, Group A leaders Napoli will square off against Ajax once more at Stadio Maradona in an effort to advance to the Champions League knockout round.

The teams will meet again on Wednesday night, with the hosts having the opportunity to guarantee passage by defeating their Dutch opponents a second time; the visitors will need points to keep up with Liverpool.

Napoli vs Ajax Tips and Prediction

Napoli eliminated their third consecutive Champions League opponent last week, rallying from behind to thrash a shell-shocked Ajax 6-1 in Amsterdam, further solidifying their status as one of Europe’s most fluid offensive groups.

In-form striker Giacomo Raspadori scored the equalizer at Johan Cruijff ArenA, and the Partenopei went on to win their ninth game in a row after taking a lead into halftime. Raspadori scored twice in the second half, adding a Khvicha Kvaratskhelia goal for good measure.

Giovanni Simeone, another recent summer recruit, scored a sixth goal late in the game as Napoli raced to the top of Group A and solidified their position as a major power in continental play.

After a second impressive victory in Europe, which included three-goal victories over Rangers and Liverpool, they immediately followed up on Sunday by launching another barrage of goals in Serie A.

When Luciano Spalletti’s team returned to domestic action, they went to lowly Cremonese and delivered further destruction to an opponent defense, scoring three goals in the closing 15 minutes to earn a victory. Following Atalanta’s draw over the weekend, this result retains the Campanian club atop the Italian standings with a two-point lead.

Napoli has scored 13 goals in the Champions League and 22 goals overall, making them one of just two unbeaten teams still in Serie A after nine rounds.

Therefore, When the knockout phase begins after the World Cup, Spalletti’s hopes of taking the Neapolitan team past the last-16 for the first time may very well come true. But first, they must ensure qualification.

Ajax must play the team that handed them their club’s worst-ever defeat in a European match so soon afterward. There is no time to wallow in their misfortune because advancement from Group A is still very much up for grabs.

After outscoring Rangers by four on the first night, Alfred Schreuder’s team has recorded three points so far, which puts them one point behind second-placed Liverpool. However, midway through last month, they were defeated by a late goal at Anfield.

Ghanaian striker Mohammed Kudus has scored in each of his three matches since scoring the game’s first goal against Napoli at the Johan Cruijff Arena. The Dutch powerhouses have also had plenty of firepower in the Eredivisie.

Ajax is second in the standings after nine games of the 2022–23 season, has lost just one match, scored 27 goals, and allowed just eight goals. After beating Volendam on Saturday, they are just one point behind league leader AZ Alkmaar.

The four-time European champions, of course, bucked the odds to make it to the last four in 2019, but since then, a number of departures have left a new-look team seeking for its identity under Schreuder, maybe none more so than the departure of coach Erik ten Hag.

The former Club Brugge boss will need to persuade his team that they can bounce back from back-to-back Champions League losses and start scoring points again since time is of the importance.

Napoli’s confidence is at an all-time high after the club’s first eight consecutive victories. But because Ajax is still smarting from last week’s defeat and will be careful not to repeat it, this matchup between two appealing teams might be closer than usual.