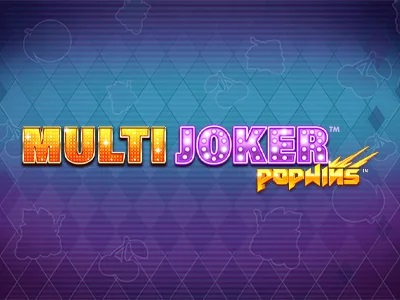 The Multi Joker Popwins is one of the slot games that will help horn your joker skills. It’s the work of Stakelogic software providers. Originally, this game was a Joker Drop Popwins before the developers upgraded it to give it a fresh and outstanding look. The changes include the new moniker free spins multipliers, tweaks, and feature redacting. However, there are no changes to the game’s look as the producer maintained the classical atmosphere. Traditional iconographies like candy or fruits are also part of the theme of this slot game. But the significant part of the game is the scenario where the lucky 7s, jokers, and similar features dominate.

Punters participate on the game panel in the middle of the screen which radiates with fruit and a diamond-patterned back wall with enough illuminating lights.It comes with a nice EDM track to entertain players while playing.  Despite the track sounding generic, it’s relaxing and comfortable to listen to.

The game has five reels and four rows at the base, which grows after making some wins. You will have the privilege of 2048 ways to win from any winning combos making your time on the table worthy. The winning combos pay from the left to the right and vice versa. But to be safer, ensure you get a five-of-a-kind combination that pays well. You also need to know that this is a highly volatile game with four different RTP rates. The values are well stipulated in the game’s rules, allowing players to be aware of what’s ahead of them before the start. The slot’s minimum bet is 20 p/c to 20 euros.

If you’ve ever played the original version of the Joker Drop Popwins, you’ll realize that the symbols are the same and have maintained their values. The symbols include the 10-A card ranks, which are the low-value tiles, the limes, plums, cherries, oranges, and grapes. Others are watermelons, pears, and sevens are the highest-value symbols. Hitting a five-of-a-kind win will earn you 0.5-0.6X the bet or 0.75-5X the bet for five premiums. But the joker chap will be visible in the wild, and it can replace any of the symbols except the scatter symbols.

The Multi Joker Popwins slot game has been around for some time now. But this doesn’t mean you shouldn’t understand its features, as this will help improve your gaming tactic,s or it can help a beginner know the tricks of winning the game. Remember, if you land a winning combo new symbol will replace the symbols that formed it. This will increase the height of the other reels and the number of ways to win. But when the reels attain the 7th position, they will reset to their original sizes in the base game, ready for a paid spin round. However, when the reels are capped to their full height, the winning symbols will replace one symbol instead of two.

This is one of the meters that appear in the base game. When small diamond tokens appear on the top of the symbols, they will be collected on the meter after landing. If you fill the meter with five diamonds per spin, it will earn you five wild diamond symbols on the 3rd, 4th, and 2nd reels. Such will empty the meter and make resets in between the spins.

A player can earn free spins if five reels attain the seven positions high in the base game and the third meter is full. If this happens, one gets 8-15 free spins which come from the wheel spin, and a multiplier from the random wheel. The first wheel yields multipliers of 2X-10X, while the second wheel awards 5X-15X, and the third wheel will earn you multipliers of between 10X-25X your bet.

Note that the grid should be locked after seven symbols are high all the gaming time to land free spins. There are also instances when one can be lucky to land multiplier symbols of up to 100X the bet. But when you get more than one multiplier symbol, their total value will reflect the overall win as they’re added to the other multipliers.

Landing a super stake will double your bet, making you earn more. But you have to add scatter symbols when using free spins on the 2nd,3rd, and 4th reels. When you land three scatter symbols, you will earn five free spins.

This feature allows any eligible player to buy free spins and try their luck to earn more prizes. A player has four options to choose from, with each rewarding up to 15 free spins. If you choose super stake off, you can earn 100X, 180X, 200X, or 400X the total bet for multipliers ranging from 10X-25X. At times this can result in a random multiplier win. But the prizes depend on when the super stake is activated.

The Multi Joker Popwins is among the four slot games by Stakelogics you will enjoy playing. However, one notable thing with the licensed Popwins slots is that they are not bold enough to give the users a memorable experience. This can be attributed to the developer’s failure to pair the mechanical part with the technical bit. Or it could be that the developer loved the theme and the experience it brings. However, the slot is restricted to safe themes like candy or jokers. Additionally, the game imitates the Joker Drop, with the difference between them being on the reduced maximum win and tweaks.

Despite this game being less inspiring, it’s a satisfying slot that gives player value for their money and time. Also, it has great features that require players to be smart to earn a win. As a player, you must understand how the multiplier symbols/win multiplier combo works to bag a big prize. But don’t be over-ambitious and expect to make 100X your bet on every spin you make, as this can only happen by luck.

What makes this game stand out is the max win which is 20,427X the bet, and a 10,000X win cap. Apart from that, the game is not enticing as the developers failed to develop unique art and sound that make it original. This is despite it having better classical themes and modern sounds. It would be wise if Stakelogics became more creative and incorporated something fun and wilder.