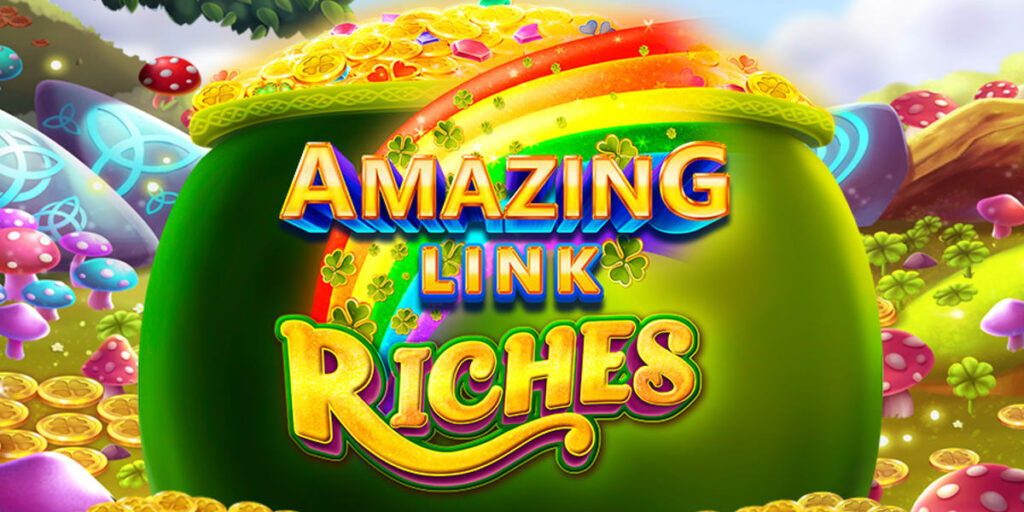 Amazing Link: Riches will be the series’ third slot game, and it will be developed by SpinPlay Games in conjunction with Microgaming. It’s distinct from the other two slots that employed the Amazing Link mechanic because the other two were Ancient Greek-themed, whereas Riches’ images are Irish-themed. The features supplied, not the story, form the link between them.

You’ll find a playing area with 5×3 reels and 18 active pay lines. You can win up to 5,300 times your investment on this slot machine, which has a medium to high volatility and an RTP of 96.33 percent. There’s a lot going on within, from stacked wilds to scatters, the Amazing Link bonus, free spins, and the Jackpot pick.

A Mega Jackpot worth 5,000 times the stake can be won by using one of the slot’s features. Overall, you can win up to 5,300x your bet at the end of a round, which isn’t terrible for a medium-high volatility game.

In this example, the RTP is 96.33 percent, which is higher than you’d anticipate from a modern real money slot.

On the reels, stacked wilds with a jewel-like four-leaf clover will be employed to assist you form more winning combos. These act as substitutes, and because they can take over entire columns, they can have a significant impact. They will not, however, be used to replace the feature symbols.

The scatter symbol, the Pot of Gold, can appear on reels 1, 3, and 5. You can get the free spins if you get all three to land at the same moment. You’ll get a Fantastic Wild Reel in this mode, which is filled entirely with wilds that also behave as amazing symbols and can trigger the respin feature.

The game’s name derives from the Amazing Link mechanic, which is based on the Hold & Win respins that are currently popular in many other slots. The criterion is that you see at least 6 Coin symbols. There will be a $1,000 prize for each one. If you don’t acquire all six symbols, the coins are gathered instead, and a countdown begins, with the feature finally being available if you get enough of these failed spins.

There is a chance that a jackpot feature will be triggered at random. It’s a picking mechanic where you have to choose from a variety of coins in order to find three of the same type. You’ll be able to claim one of the four fixed jackpots, which range from Mini (20x) to Minor (50x), Major (500x), and Mega (1000x) (5,000x the stake).

If you get 6+ Coins on the reels, on the other hand, you can enter the Amazing Link respins. The triggering Coins stick together, and you get three respins in which you try to get more of them to appear. If they do, the respins will be reset to three.

Despite its early use of Ancient Greek deities, the Amazing Link series does not appear to have a unifying theme. The iconic Irish luck theme is being used in the third game of the series. The background image depicts beautiful Ireland, complete with woodlands, verdant fields with toadstools, and rainbows.

A variety of symbols will appear on the reels, many of which will be familiar to you. This means you’ll start with six Royals and work your way up to A, with toadstools, beer, top hats, wishing wells, pots of money, coins, and four-leaf clover wilds thrown in for good measure.

Amazing Link: Riches appears to be another solid entry in a series that has proven to be quite popular with players. It isn’t the riskiest slot on the market, and it has a fair mix of extra features, albeit none of them are exclusive to it.